In the late 1950s and early 1960s, LEGO produced several small models to go with its various town plan sets. These figures were molded in one piece and hand-painted in various colors. They were packaged by tacking them inside a cardboard box with spots of glue. As a result, they are sometimes found with glue residue and bits of paper on the bottoms of the wheels. 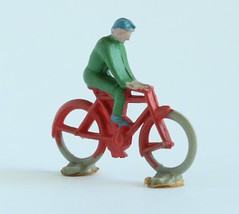 The parts were painted by home-workers, who apparently chose their own combinations. The assortment in each box also varied, with a mix of motorcyclist and bicyclists.

Browse 1:87 scale cyclists and motorcyclists at 62 Bricks on Bricklink.